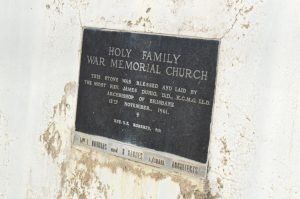 Holy Family Church is a Catholic Church under the direction of the Archdiocese of Brisbane. It is located at 37 Ward Street, in the Brisbane suburb of Indooroopilly, approximately six kilometres from CBD of Brisbane.

This striking church is one of Australia’s finest examples of Modernist architecture. The Church of the Holy Family was built between 1961 and 1963, and was designed by Brisbane architectural firm, Douglas and Barnes. From architectural and engineering perspectives, the design of this Catholic church was extremely progressive for the time. A new method of concrete construction was adopted to form the pleated concrete structure.

This was outlined in the Catholic Leader at the time: “The main structure, ‘growing’ out of the sloping site and towering over the surrounding area, is cast ‘in situ’… The method of construction was most unusual. The foundations, ground floor and main floor were poured in the normal manner. However, the upper portion of the building was constructed from end to end by means of a mobile steel framed collapsible Jumbo. Instead of the building growing upwards, it grew longitudinally” (The Catholic Leader, November 1963). The Catholic Church commissioned several important Queensland artists to create pieces for the new building. Internationally recognised artist Ray Crooke, was commissioned to paint the ‘Stations of the Cross’ on the internal walls. Crooke has won many prestigious awards, including the Archibald Prize in 1969. He was awarded an Order of Australia for services to the visual arts in 1993 and an Honorary Doctorate from Griffith University in 1996.

The two sculptures on the church’s exterior, ‘Finding of the Child Jesus in the Temple’ and ‘The Holy Family’ were created by Brisbane artist, Edwin A Guth. The baptistery, situated beside the church entrance and connected by the covered walkway, was designed as a precast concrete octagonal structure, with a high concrete spire. The coloured glass on the walls resembles the leadlight windows in more traditional churches. These mosaic windows represent the Seven Sacraments and were designed by local artist, Andrew Sibley.

The Church of the Holy Family was the last major building project for Catholic Archbishop James Duhig, under whose leadership many of Brisbane’s most outstanding Catholic buildings had been built.